Visitors 4
Modified 6-Mar-11
Created 5-Mar-11
37 photos
Big enough to hold 4,000 worshipers and breathtaking in the richness of its interior furnishings, the Notre-Dame Basilica in Montreal is a magnificent Neo-Gothic church.
Designed in 1824 by James O'Donnell, an Irish-American Protestant architect from New York, the architect was so moved by the experience that he converted to Catholicism.
The Great Casavant Organ
The great organ that towers over the choir loft of the Basilica was built in 1891 by the firm of Casavant et Frères of Saint-Hyacinthe. Since then, the vast instrument has undergone several restorations. To mark its 100th anniversary, additional stops were installed, bringing the total number of pipes to 7,000. The largest pipe measures 10 metres (32 feet) and the smallest, 6 millimetres (1/4 inch).
In 2002 a second trompette en chamade (outward facing trumpet) stop was added. The organ today has 92 stops distributed over four keyboards and a pedalboard. The present console dates from 1962. 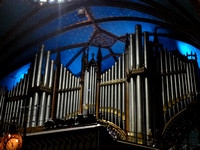